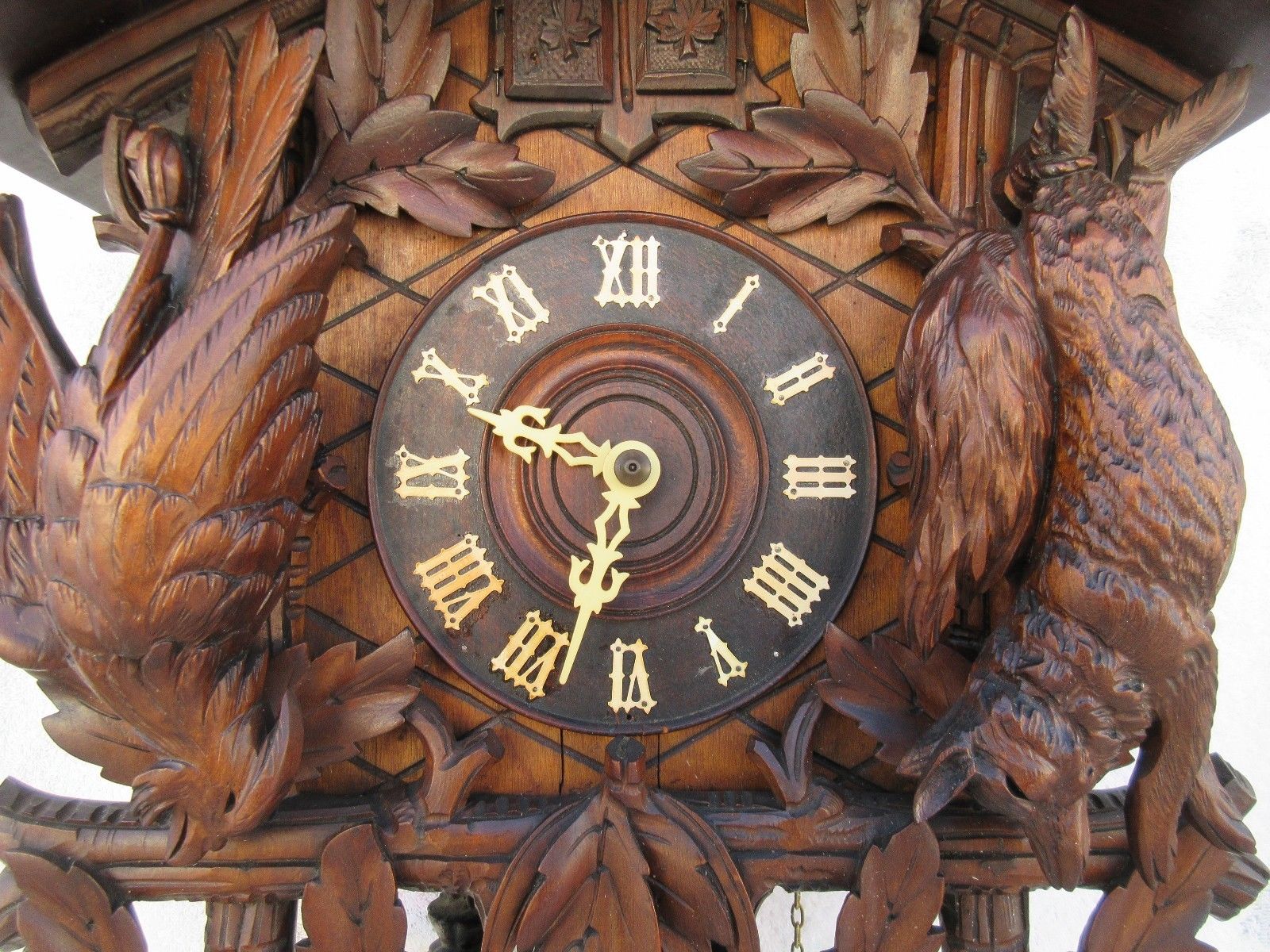 There are no breaks or repairs on this clock except with the exception of one on the pediment. This is not original to the clock. Two of the three weights are original and matching. The third weight is a little lighter than the other two. The third weight is not marked, unlike the other two stating 2 ½. The pendulum tock and bob are replacements as well as the plastic antlers on the deer. These elements were added to the clock. The bellows are suspected to be original and sound perfectly. This clock however is missing the rear door and gongs. The movement of this clocks works perfectly and the time train has little wear that is to be expected. The cuckoo and quail trains are in perfect condition. 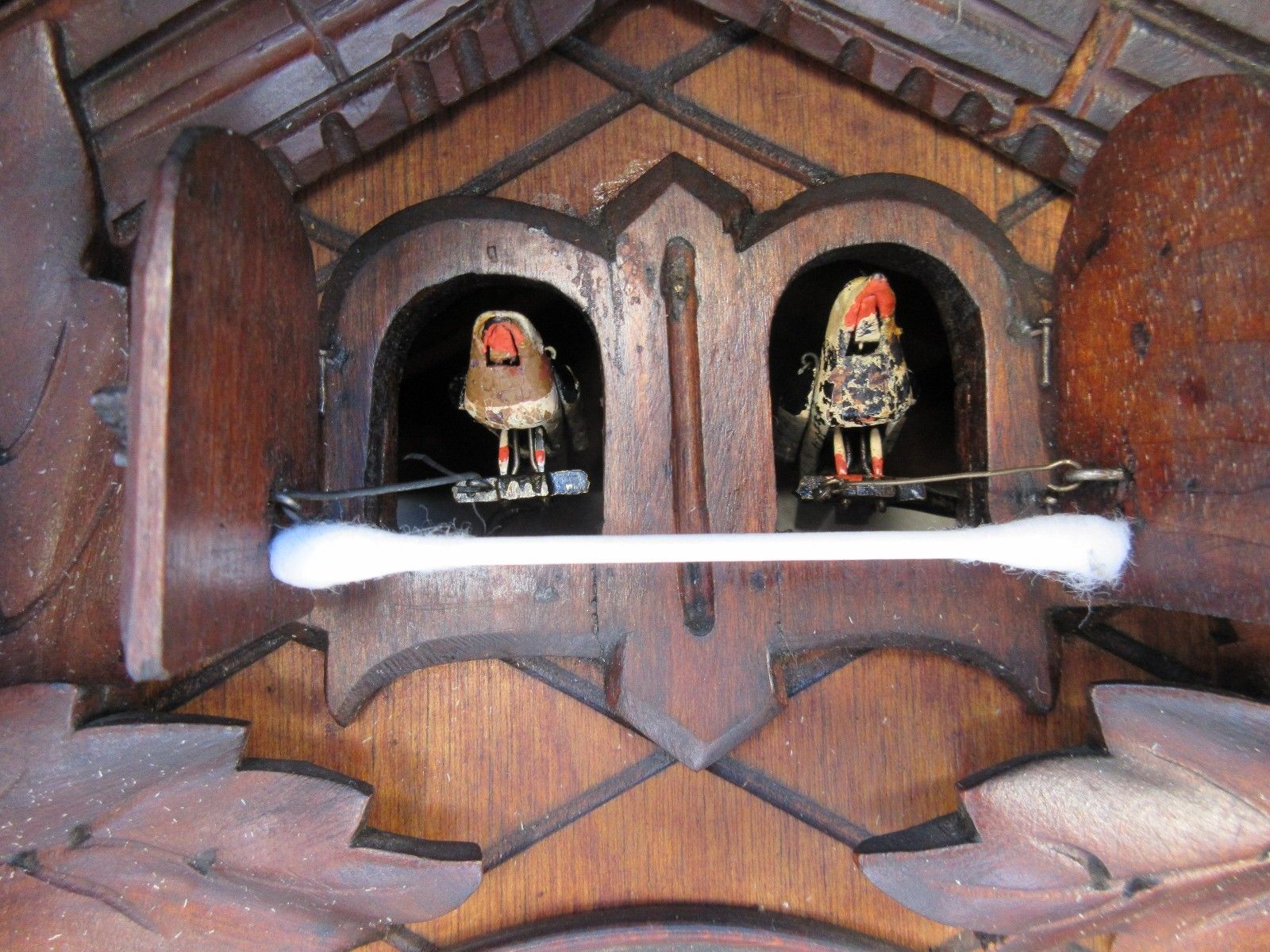 There is a beautiful deep cross hatching pattern on the face of the case that backs the dial and really make this clock pop. Another unusual aspect to this clock is that the doors on the side have arched tops which is not seen very often. The stain of this clock is beautiful with its deep colors with a hint of reddish tones. The birds on this clock are heavily painted around the mouth. It appears as if someone went a little heavy on the lipstick. 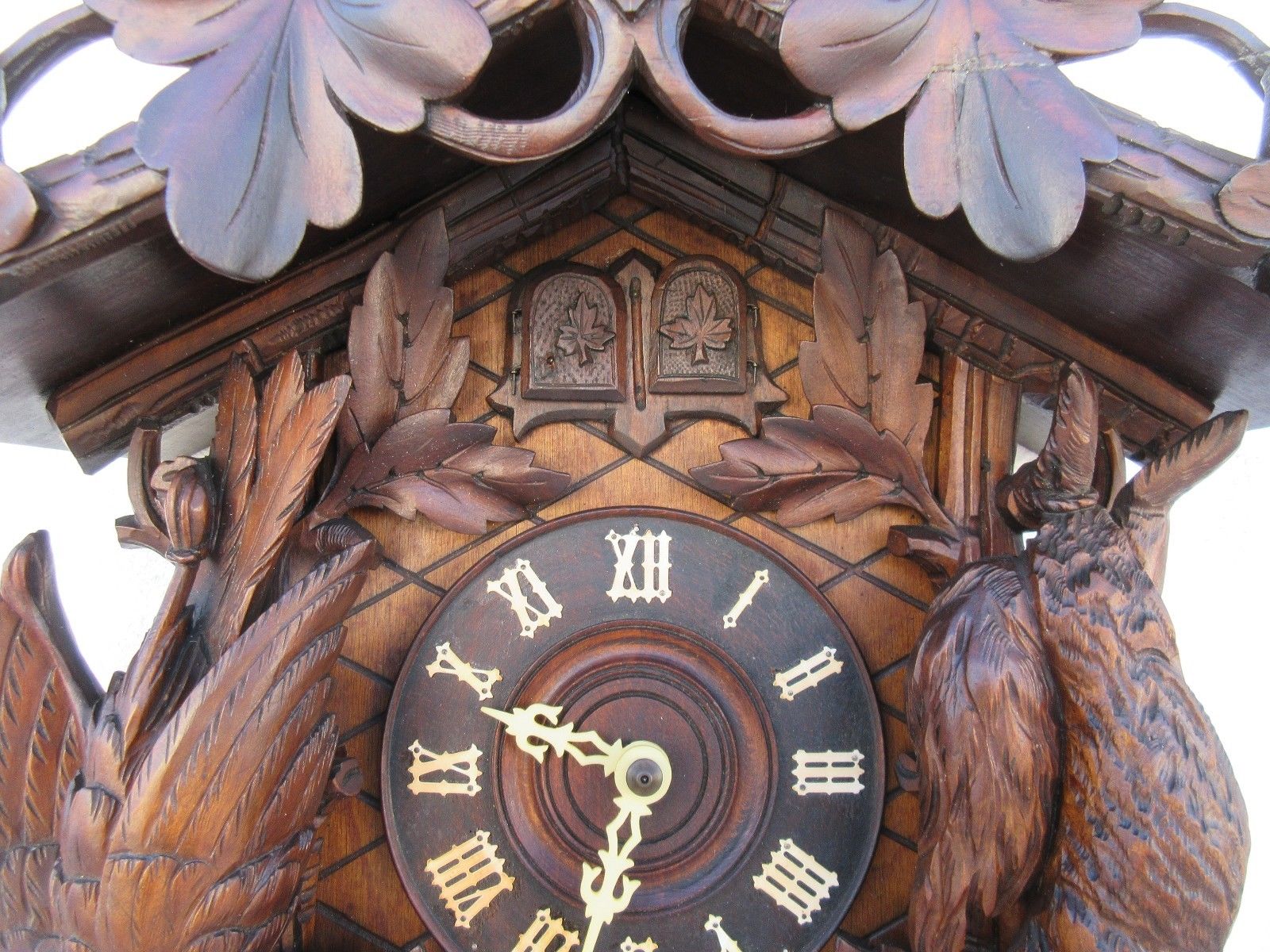 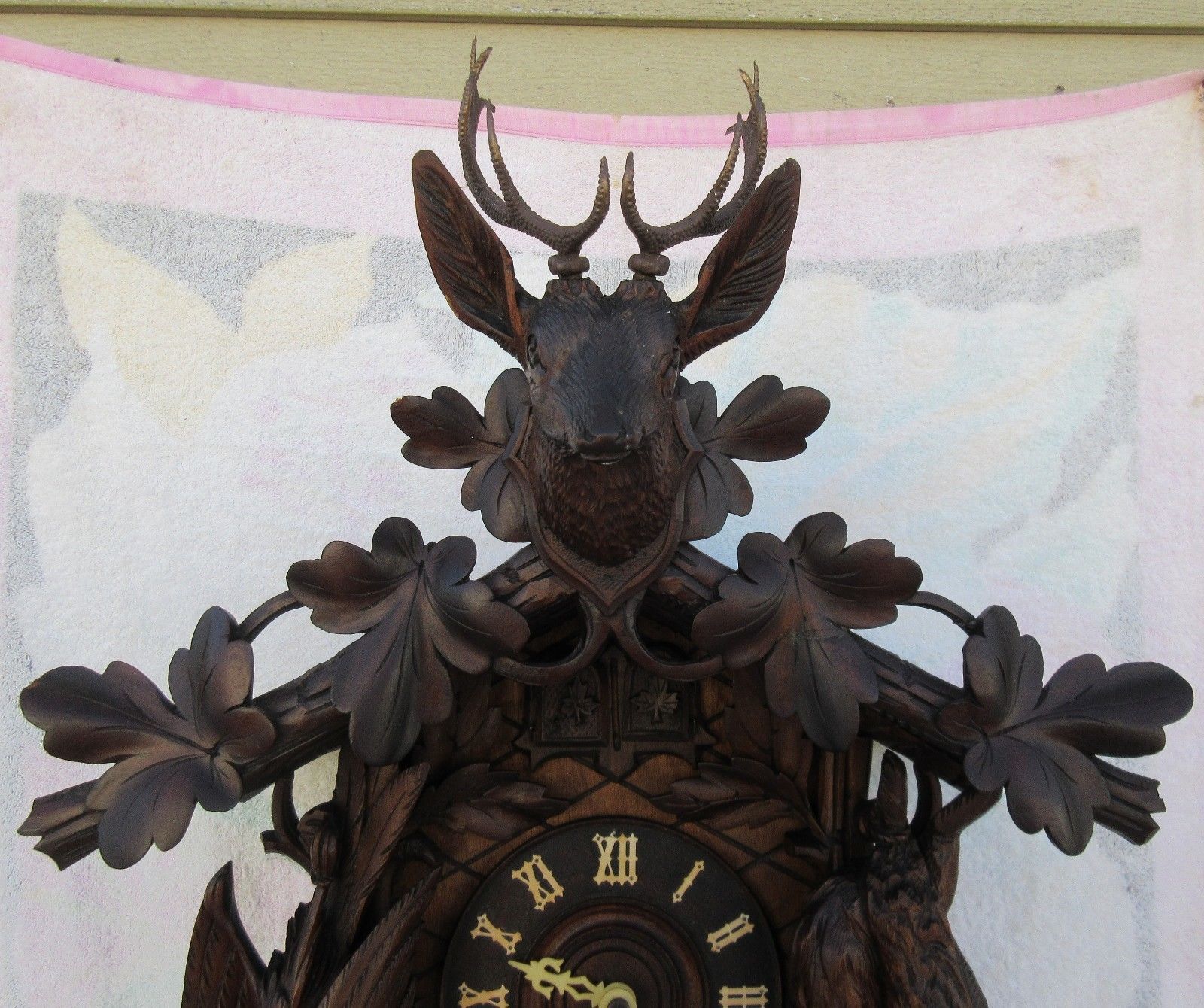 This clock is a cuckoo quail clock which is different than a standard cuckoo clock. The cuckoo quail clock is a clock the goes off every quarter hour. It is a quarter hour striking clock, whereas the standard cuckoo calls out every half hour. The quail, located in the left door of this clock calls out every quarter hour. For 15 minutes it calls once, 30 minutes twice, 45 minutes is three calls, and at the hour it calls four times. The quail on the hour is immediately followed by the cuckoo calling from the second door located on the right. It calls according to the hour.

There’s a lot about cuckoo clocks that many people do not know. Not only do they keep track and tell time but they grace your home with beauty and elegance, and tell a story. This clock is a typical Black Forest house and there are so many things that I find special...

Hönes is one of the best-known and long-standing cuckoo clock manufacturers in the Black Forest. It was founded in the year 1950 by Daniel Hönes and in 1984, it was later taken over by Trenkle, which is also known for producing high-quality cuckoo clocks. There is a...

Choosing the perfect cuckoo clock can be quite challenging because there are so many choices available on the market these days. Selecting the best one comes down to a matter of personal taste, so it is better to choose a clock that suits your style. This...

Vintage Schatz Cuckoo ClockThe Schatz Clock Company aka Jahresuhrenfabrik from the Black Forest region of Triberg, Germany has a long and interesting history when it comes to making clocks. August Schatz and Anton Harder, founders of Schatz, worked together in the...

What you're looking now is the 2008 Clock of the Year winner model from August Schwer. This clock comes with the VdS label - a certificate issued by the Black Forest Clock association. This clock is an 8-day mechanical clock with exquisite carvings. The style is...

This beautiful 1-day movement, traditional cuckoo clock was handcrafted by renowned Black Forest clockmaker, Hurbert Herr. Hubert Herr is known to produce high-quality cuckoo clocks since 1860. Starting in a small workshop and now in its 5th generation, the company,...

I have always been fascinated with cuckoo clocks since I was little. Their intricate designs and the sound they produce are magical.  With all the latest and high-tech clocks and watches we have now, they have stood the test of time (figuratively and literally)....

This clock is beautifully rendered and I could not believe that this was the gift I had received. I enjoy my clock very much and it surprised me how beautiful a clock could be. I was in awe when I opened the wrapping paper to this item. I love the way the clock looks...

Elegant and beautiful clock without music

This beautiful clock was the best thing I have ever ordered. It is made of wood and the designs are beautiful. I love this one-day clock because it is just perfect for the style and the sound. It is a one-day clock that keeps great time but does not play music which...